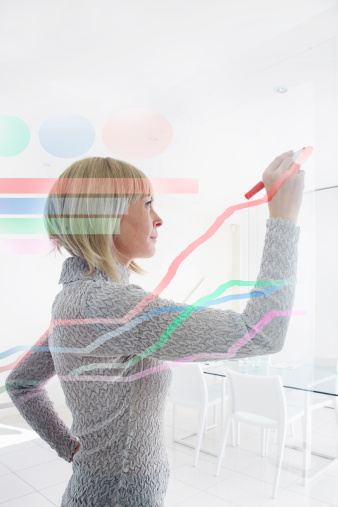 Businesses are metrics-driven and, as good stewards of our businesses, we monitor a number of them on a regular basis to guide our decisions and our understanding of our performance.

But, a singular value of the metric doesn’t give us much perspective on whether we’re improving or not.  So, we might compare our performance now to our performance a year earlier, also known as year-over-year (or YoY) performance.  Knowing our YoY performance gives us a “first-order rate of change” of the metric which is essentially telling us how fast the metric is either growing or shrinking.

For example, saying that a company’s revenues for Q1 of 2013 were $120 million dollars is significantly enriched by adding that the same metric a year earlier, in Q1 of 2012, was $100 million.  This gives us a YoY growth rate of 20% calculated as follows:

Here’s where we get to what YoYoY is; you’ve probably already guessed it: year-over-year-over-year.  What you may have not guessed, however, is how valuable adding just that one additional year is to the understanding of the metric.

Building upon our earlier example, adding that revenues in Q1 of 2011, 2 years earlier, were $90 million, tells us not only that we grew by 20% between Q1 of 2012 and 2013, but that we accelerated relative to the prior year’s growth rate:

With this additional information, we’re now quite optimistic about this company that not only grew its revenues over the past year, it accelerated that growth rate over the prior year.  What we’re now talking about is called the “second-order rate of change” and can be quantified objectively as follows:

So, in our example, that would be:

The 80.2% above is the measure of the metric’s acceleration over the two-year period; if that acceleration were to continue, the forecast of YoY2014 would be well in excess of its current 20%:

So, in our example, that would be:

While there’s no guarantee that the same rate of acceleration will continue, ignoring acceleration in one’s forecast can significantly under- or over-estimate a future metric. 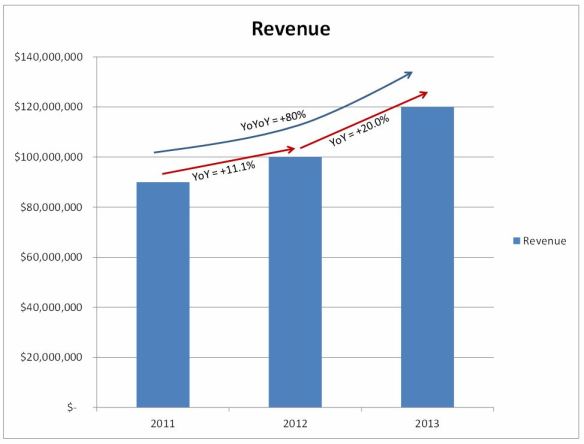 So, how do you interpret YoYoY?

This simple technique leveraging only three values of the same metric (current, year-ago, and two-year-ago) can provide an impressively rich context and it can work on any metric you’re tracking!

4 thoughts on ““YoYoY”: A Simple Analysis Technique You Can Use to Impress Your Colleagues”