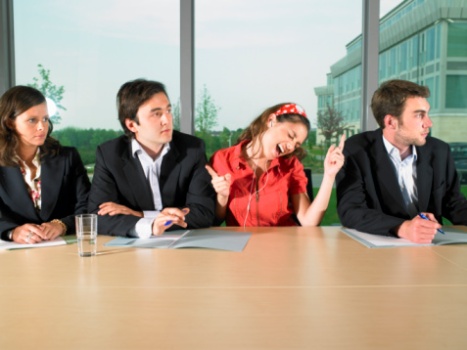 Have you ever wondered why meetings with so many people around the table frequently leave you with a feeling that little was actually accomplished?  It’s likely because you have one or more of the following four colleagues in the meeting.

Sometimes seen as the least harmful, the warm body is the quiet listener who attends many meetings and nearly never participates let alone contributes to the discussion.  Where they become harmful is when a meeting consists of too many of these folks giving the impression the initiative has a lot of backing and thought leadership when, in fact, there are just warm bodies filling the seats and a few folks actually trying to drive the initiative forward.  This, of course, belies the waste of the company’s money.

This wonderfully opinionated person is a staunch advocate of the status quo, irrespective of whether it can be improved upon.  They sit in the meeting with elbows crossed and are nearly fuming at all of the changes being espoused.  The conservationist, usually a long-timer who’s been around the company for years, can frequently provide some insight into why the status quo is the way it is; however, they’ll impede any progressive discussion that could have otherwise taken place.

These people are usually very nice, approachable, and talkative folks who are frequently speaking when no one is listening.  They’ve become an accepted part of our meetings and you’ll know who they are based on the number of folks who immediately go to their cell phones  under the table when they speak.  Innocuous?  Yes; but, like the warm body, they sure can cost a lot of money and delay the ability to discuss what really matters.

The Teflon man creates a lot of work…for someone else.  This person is very difficult to exclude because they are frequently a key stakeholder in the meeting; however, they are adept deflectors of responsibility.  The most talented of them don’t actually deflect their own responsibility; rather, they create unnecessary prerequisite work for others to complete before their contributions to the effort are to begin.  The Teflon man isn’t just slowing progress, they’re impeding it by refocusing attention on issues only tangentially related to the meeting’s key objective.

This post is featured on Wired Magazine‘s Innovation Insights.