Some of you know that, even after the 30-stock Dow Jones Industrial Average (DJIA) hit never-seen levels some weeks ago, I was eager to see another indicator do the same thing: the more broad-based Standard & Poor’s 500 Index (S&P 500) consisting of 500 of the United States’ largest, publicly-traded companies.  This past week, the S&P blasted through the high-1500s level that it had reached twice in the past: during the peak of the so-called “Internet Bubble” in 2000 and, more recently, at the peak of the so-called “Credit Bubble” in 2007.

Turning our attention elsewhere, let’s consider the king of commodities, the precious metal widely-coveted throughout the world: gold.  The metal, while having little practical value, has long been seen as both a hedge against inflation and as a physical store of wealth.  Over the last five years, with concern over the stability of fiat (i.e., “paper”) currencies such as the Euro and the US Dollar, many have considered gold an insurance policy against the collapse of paper money.  For that reason, some, including me, had felt that gold had been quite over-bought (i.e., overpriced).  As they say, one knows when prices have peaked when everyone around you (aka “the herd”) is talking about buying it.  Since peaking at over $1,900 per ounce in 2011, gold has traded in a range between $1,600 and $1,800 per ounce for the past couple of years.  However, this past week, gold prices plummeted dropping to below $1,500 per ounce.

Why do I bring up gold when talking about the stock market and the S&P 500?  Well, for me, more important than gold’s role as an insurance policy, I see gold as a basis for fiat currency’s purchasing power and, more importantly, a measure of “real appreciation” of other investments.  To understand what I mean, let’s consider where things were in March of 1991: the S&P 500 was at 370 and an ounce of gold traded for roughly $370.  As of the most recent close of the stock market trading day, the S&P 500 was at 1,589; that is over 4x the 1991 level.  While that’s impressive, gold, even after its recent drop, is currently trading at roughly $1,500.  In short, at both points in time (1991 and today), one ounce of gold can be said to “buy the S&P” (roughly-speaking) since gold, in dollar terms, is priced approximately the same as the S&P.

What does that mean?  It means that someone who had purchased an ounce of gold in 1991 would’ve done exactly as well as someone who’d purchased an equivalent amount of an S&P 500 index fund over the past 20-plus years.  There is one major consideration, however: the S&P stocks pay annual dividends that gold doesn’t.  However, many would argue that lack of dividends is a small price to pay for the “insurance benefit” provided them by the precious metal.

But, more important than all of that is the fact that at both prior peaks of the S&P 500, the stock market had reached levels well beyond that of parity with gold.  The chart below demonstrates this. 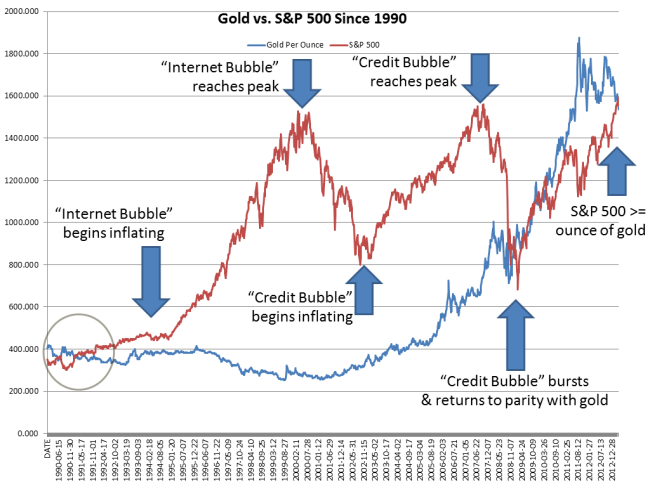 So, why do I think the S&P’s current record level is very different than in 2000 and 2007?  Put simply, at least for the moment, the S&P is at roughly parity with gold and the two curves are coincident (roughly-speaking).  Even if the S&P crosses 1,600 and gold drops down to $1,200, it would take only 1.33 ounces of gold to “buy the S&P”.  In short, we are a far cry from the levels in 2000 and 2007 and are, once again, within a stone’s throw of maintaining parity levels between the two curves.

What’s a unique possibility?  *Both* gold and stocks could decline together in a deflationary move where investors move to cash…

We continue to be in very interesting times in our financial markets; there seem to be a lot of “firsts” of late.

One thought on “It’s Different This Time: What Gold Can Tell Us About the Stock Market”