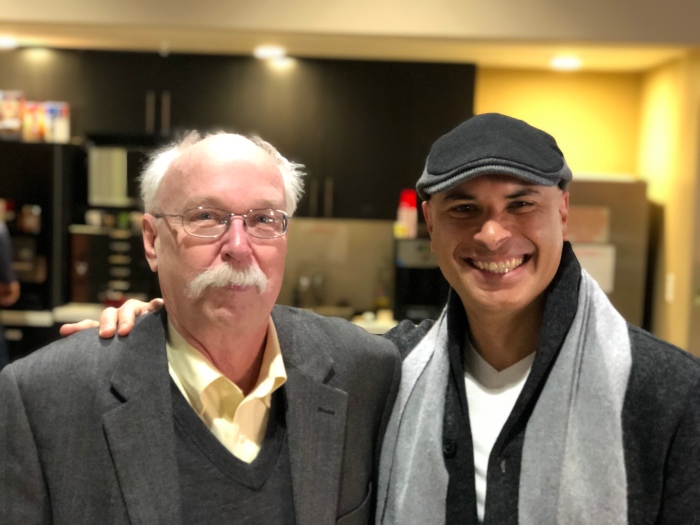 Nearly 30 years ago, this man changed my life.

Yesterday, I got to thank him in-person and with my team by my side.

Yesterday, I also learned of his story for the first time.

In the early ‘90s, as a college senior studying computer science on a foreign-student visa, I applied to a number of competitive doctoral programs that would allow me to extend my visa for another number of years. To my distress, I was not accepted into any of the programs and faced the reality of losing my ability to stay in the US and, equally scary to me, putting a huge question mark on my future.

A few days after the distressing news, I received a note from Dr. Lee Hollaar asking me to his office. Dr. Hollaar, with unwavering generosity, started the chat with, “[I’m looking for a graduate research assistant to work on my research project this summer; come work for me this summer, and I’ll do what I can].” I worked hard that summer to repay Dr. Hollaar’s generous offer which, at the time, was both an opportunity to save my future here in the US and, for the first time in my young life, paying me a stipend that exceeded the $3.35 per hour that I had been paid for years. Later that summer, I received a letter from the department giving me a “provisional” acceptance into the program…and it was due to Dr. Hollaar’s urging and letter of recommendation.

I now had something to prove: that the “provisional” designation wasn’t necessary, and that Dr. Hollaar hadn’t made a mistake by putting his name on the line for me. I completed that first graduate degree with the highest grades I had ever achieved in my life.

What I learned yesterday for the first time is that Dr. Hollaar, after having been accepted to both MIT and IIT for his undergrad, was rejected by his own alma mater for graduate school, much like what had happened to me. And, much like my story, a professor saw his potential, put a challenge in front of him, and helped him gain provisional acceptance. His struggle motivated him to “pay it forward” and, many years later, I was a fortunate benefactor of his kindness.

I’m so honored to consider myself a disciple of Dr. Hollaar’s with so much of my career tracing its path back to his kindness in giving me a chance. He gave me a chance when I really needed it.

One thought on “The Chance That Changed My Life”